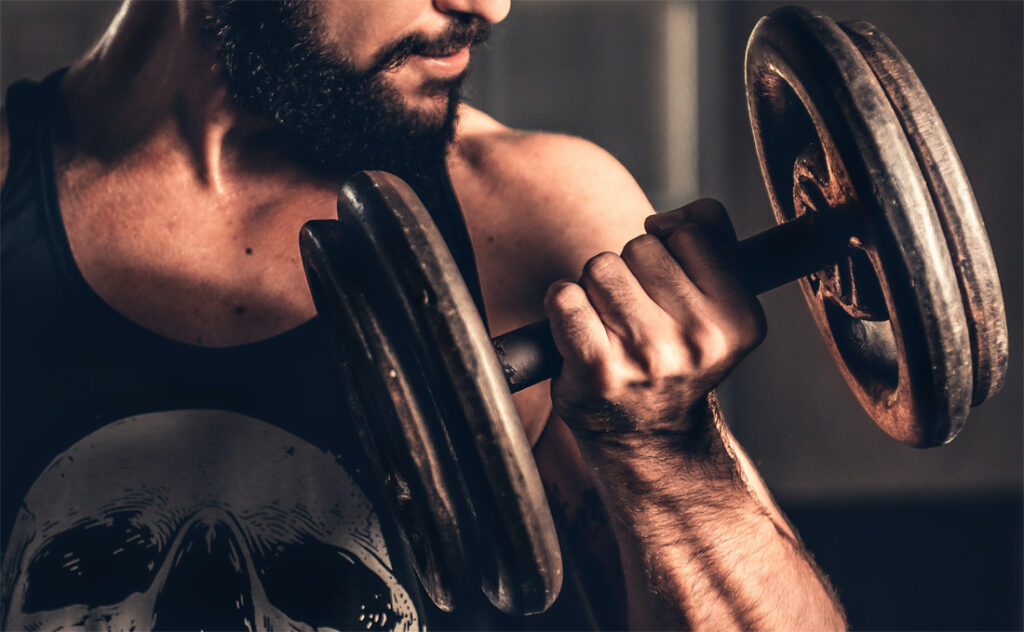 In this quick guide, you’re going to learn everything you need to know about using Cardarine. I’m going to answer all the main questions around using this SARM, including explaining to you why it’s not actually a SARM at all.

I’ll talk you through Cardarine dosage and half life. I’ll tell you about Cardarine PCT requirements, and if they exist. We will also talk about the effects and benefits of Cardarine, side effects and warnings, what it’s good for and bad for, along with places you can still buy pure Cardarine from online.

The History Of Cardarine

Let’s start the story by telling you how Cardarine came to exist. Cardarine, also known as GW-501516 and Endurobol, was first synthesized in 1992 and was developed as a potential treatment for metabolic and cardiovascular diseases.

However, in 2007, the trial stopped as cancer cells were found to have developed in lab rats as part of the trial. I’ll talk to you a lot more about that later, because since then, bizarrely, quite the opposite effect has been found instead.

However, as part of that research in the early 2000s, it was noted that the lab rats in the trials benefited from significant uplifts in strength and cardiovascular endurance.

More than that, a significant reduction in body fat was noted due to this increased activity, and PPAR delta activation was noted to have increased mitochondrial biogenesis in muscle tissue (meaning it could actually strengthen and change the composition and muscle tissue).

So it’s little wonder that since the mid-2000’s, Cardarine has been increasingly bought on the grey market and used for physical endurance purposes.

Banned by all major sporting bodies, it’s known informally as “energy in a bottle”, because of the dramatic increases in energy and endurance it brings, with several people across major sports banned for using it over the years.

Although that’s not great news from a sporting point of view, to me, it’s just great evidence that Cardarine does what is claimed.

The Effects And Benefits Cardarine Can Bring To Your Workout Routine

I want to talk to you specifically now about the exact benefits that Cardarine can bring to your bodybuilding.

These are the main effects that Cardarine brings, and that I experienced noticeably when I first used it: 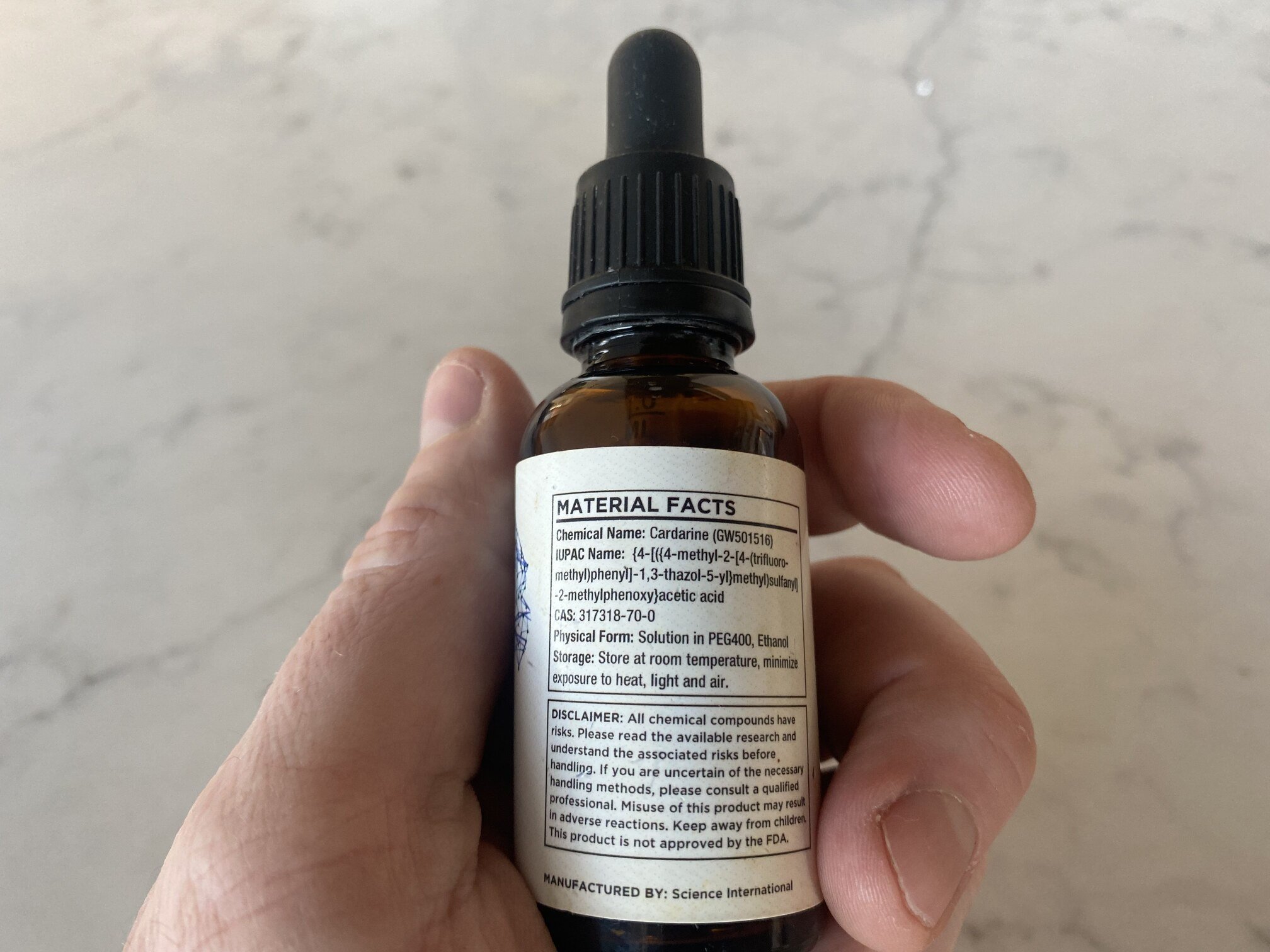 How Does Cardarine Work?

Cardarine works in the body as a PPAR Delta agonist. It activates PPARD, leading to an up-regulation in the expression of proteins linked to energy expenditure. In addition, studies have found that fatty acid metabolism was increased in muscle tissue.

Also, it’s been noted in several studies that this activation increases mitochondrial biogenesis in muscle tissue. That means it can literally remodel muscles. Not dramatically, but enough to be noted.

All that together, and what you’ve got is something which gives you more energy availability, users fat as an energy source where the body would often use glucose, and that can help to increase your muscle recovery times and development.

SARMs require a PCT supplement (usually Nolvadex or Clomid), to help address the fact that because they mimic the action of testosterone in the body, the body starts to shut down its own production thinking it has too much.

But Cardarine isn’t androgenic, it doesn’t work in the body by fooling into thinking that it has high levels of testosterone, targeting androgen receptors in muscle and bone telling them to grow.

Therefore, Cardarine does not require a PCT supplement because it does not deplete testosterone production. 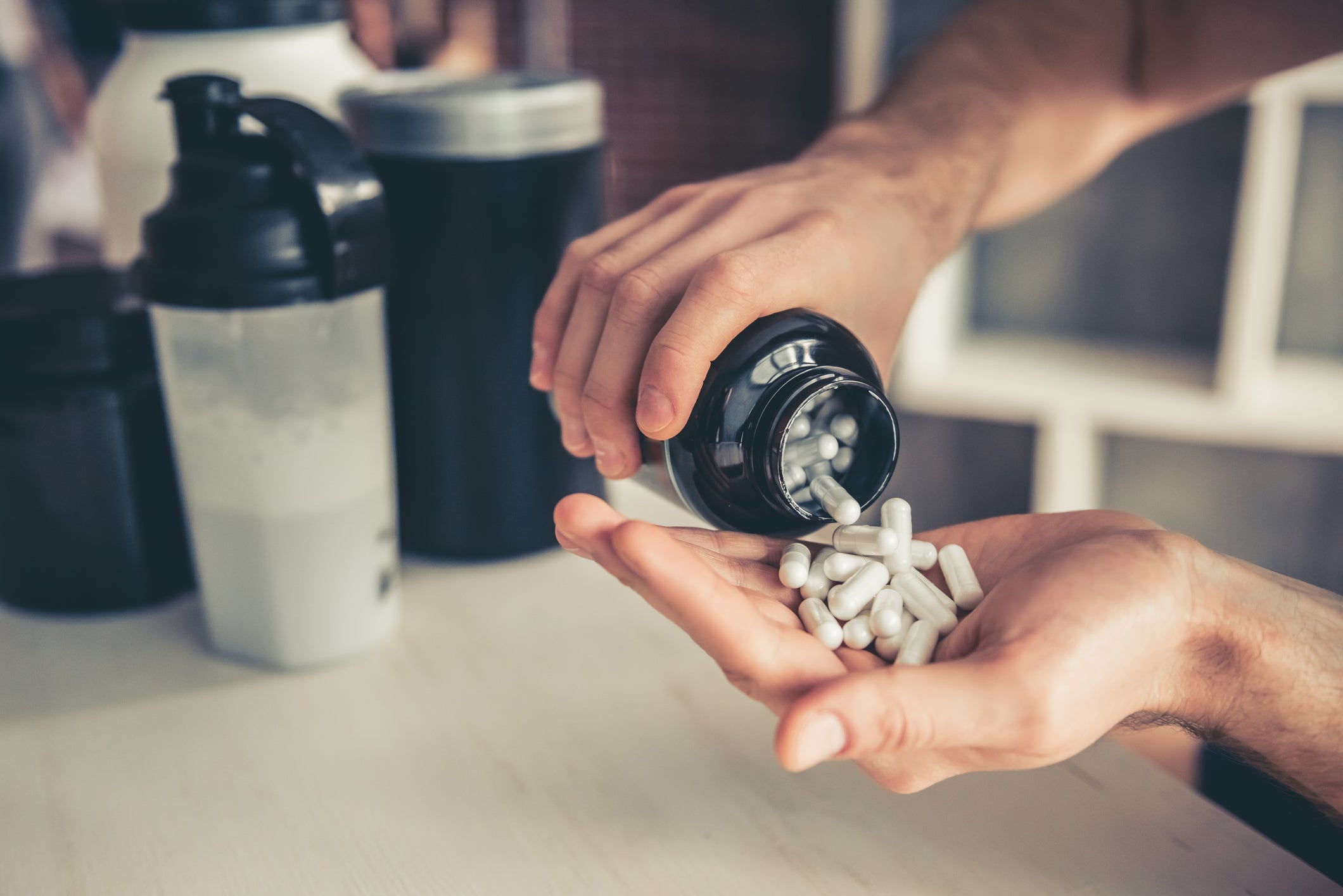 The half-life of Cardarine is pretty short, it seems to be a day or less. Some people actually dose it twice per day to get ongoing effects. Personally, I’ve always used it as a single dosage. I’ll take it once per day, usually two or three hours before I hit the gym to work out.

However, there’s nothing to stop you from splitting your daily dose in half, and taking half in the morning, and half probably around mid-afternoon. Even at a moderate dosage, Cardarine is quite potent. Certainly, 10 mg seems to be a ceiling that is used anecdotally in the bodybuilding world.

Low doses seem to be as little as 2 mg. Therefore, I’d suggest your dosage range should be between 2 mg and 10 mg, with 5 mg being the sort of dose you should be mostly going for.

Just remember that if you are stacking Cardarine that you should keep the doses lower. That’s because you will probably be using other SARMs which up your strength and energy output, and you don’t want to put too much strain on your cardiovascular system, or your muscle and ligaments.

How To Cycle & Stack Cardarine

Learning how to cycle SARMs is half the battle. Some people cycle them for too short a length of time and don’t get the maximum effects, while others go the other way and cycle them for so long that they can have detrimental effects on testosterone production and potentially push themselves too fast so that muscle and bone tissue struggles to cope.

For me, the ideal SARMs cycle is 10 weeks. Go slightly shorter for a high dose cycle, slightly longer for a low dose cycle, especially if it’s non-androgenic SARMs.

If you’re going to cycle Cardarine on its own, you could technically do it indefinitely. However, I really wouldn’t recommend that because of the potential risk from cell mutation, and the fact that you just don’t know the long-term effects generally.

I would stick with a 12 week cycle of Cardarine on its own, at a daily dose of 10 mg or less stop but more usually, around 10 weeks at closer to 5 mg.

If you’re going to stack Cardarine, which is a brilliant idea because its energy output increases will underpin both cutting and bulking stacks allowing you to increase your muscle more quickly and to cut fat more quickly, then that advice is slightly different.

For 10 week cycle, 5 mg should be a maximum, perhaps even less. That’s because you could be stacking it with other SARMs which can amplify its effects, or that create complementary ones that could be problematic.

Obviously, how you react will be very personal, and you’ll have to experiment with doses and stacks.

However, I would always recommend that you try the cycle of any chemical on its own. It could be quite a short cycle around six weeks, but it will allow you to focus purely on the results of that chemical, watch out for the side effects, and see if it’s going to be beneficial.

Then, once you know the dosage range that works for you, you can lower it slightly and then introduce it into a stack with complimentary SARMs for bulking, cutting, or simply increasing strength and endurance levels. 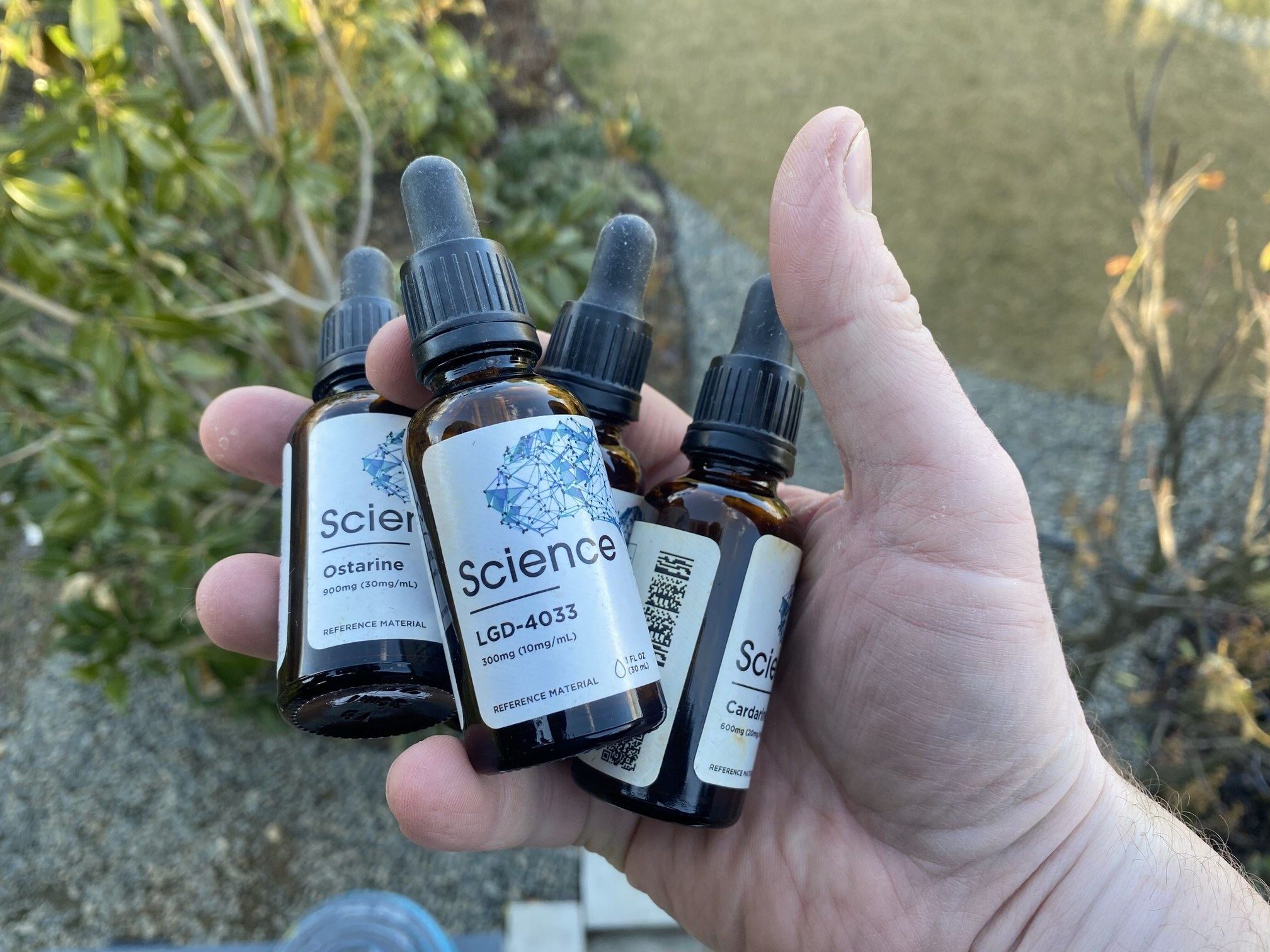 Cardarine doesn’t appear to have any short-term side effects. Certainly from my own experience and my research, I haven’t seen anyone complaining about problems using it.

If you use Cardarine at high doses alongside other SARMs, the energy output and muscle growth can outrun your ability to deal with it in terms of muscle and bone development. Therefore, I’d recommend it’s progressive so that you don’t put stress on the body.

However, the big warning is a discussion around whether Cardarine can cause cancer cell proliferation, especially in the bowel.

In 2007 the trials were stopped and it was jettisoned because a study in rats found that it rapidly caused cancer cells to appear.

However, that study dose daily for over 100 weeks, at doses that were the equivalent of 40 mg per day in a human. That’s four times the recommended human dose at more than 10 times the average cycle length.

More than that, subsequent studies have actually found the opposite. Three studies have found that at normal human dosage ranges of around 10 mg, Cardarine actually works as a tumor inhibitor. In one 2008 study on women with breast cancer, it was found to inhibit cancer cell growth.

So for me, the fact that it could be anti-cancerous, and the fact you would have to take large doses over a ridiculous amount of time, I don’t think, realistically, it’s any worse than something like smoking or regular alcohol drinking in terms of its overall risk profile.

Is There An Alternative To Using Cardarine That Does The Same Job?

Cardarine is superb because of how it boosts your energy output, increases fatty acid availability for energy, rather than storing it, and the way it increases your metabolism.

However, there is an alternative that is classed as a SARM, even though just like Cardarine it’s not one.

SR-9009 Stenabolic, or its closely related derivative SR-9011 does the same thing. In fact, it does a little more. It also alters your circadian rhythm, making you more alert generally and significantly increasing your metabolism.

If you don’t want to use SARMs, then the alternative to Cardarine is to try a natural supplement that genuinely works to mimic it. They do exist, although obviously, they are not as potent as SARMs.

Brutal Force is a company that makes some incredibly good natural supplements. Their products mimic the effects of SARMs but using groups of natural ingredients. I’ve tried several of them, and they work well. Not as potent, but they are great as an alternative will stop

For just $58.99 you can get one month’s supply of Cardalean. It offers fat burning increases, muscle protection and cut, and higher levels of energy output. Not as strong as Cardarine, but I’m assuring you it will be noticeable.

Cardarine Reviews And Can You Trust Them?

Anyone can make claims, and anyone can tell you that they got the results from the supplement that they are discussing. The truth is, you don’t know whether they use the supplement, whether it was on its own, over what period, what their baseline was, nothing.

My advice is always to ignore before and after claims, and try the supplement for yourself. Try on your own, work hard, and see what results you obtain.

One of the hardest problems with buying SARMs online at the moment is getting your hands on the stuff in the first place.

So finding where to buy Cardarine can be tougher than it has been previously.

The reason for this is a Chinese ban on the manufacture and export of SARMs in late 2020, which is now starting to bite. Where this ends up I don’t know, but availability is poorer than it was six months ago, but partly that could be down to the pandemic.

Swiss Chems sell high-quality Cardarine but in capsule format. The $69.99 you can get a total dose of 600 mg, in 60 capsules each dosing 10 mg each.

Chemyo is the best place right now to buy SARMs liquid. You’ll get the same high concentrations as other sellers but in larger 50 mL dropper bottles for around the same price. It’s a great deal and to be honest, in the current climate, I’m amazed they do it.

Let me tell you clearly, that there are huge supply problems and legal pressures on the SARMs industry. In fact, it’s the same with all types of supplements right now. The pandemic, the Chinese SARMs ban, the war in Ukraine, and inflation, it all making the availability of SARMs far worse.

Chemyo is bucking the trend by offering high-purity SARMs at good prices. If you are in the market for SARMs, buy them right now. Don’t wait, because as I’ve found, tomorrow, that company can vanish.

Chemo also does stacks. Ideally paired SARMs are for sale at discount. For me, the Andarine – Cardarine stack is a great deal right now, saving you $15 on the individual sale price.